Columbus Teacher is Keynote Speaker at University of Taipei

With a current email address on file, Guardians/parents can sign up online by following the prompts on the HAC Registration Page

We are well into our school year and nearly all our programs and core instructional initiatives are well underway. Thank you all so much for partnering with us to support your children each day. As we move through October, I wish to provide a few updates and reminders in this letter today.

Tomorrow, Wednesday, October 23rd, is a half-day of school. Students will dismiss at 11:10 a.m. Kindergarten students will leave at 11:00 a.m. from the cafeteria. AFTER SCHOOL clubs are cancelled tomorrow at Columbus and the BOYS AND GIRLS CLUB is closed as well tomorrow.
Heritage Month Celebration at the Mascaro Boys and Girls Club tomorrow night as well! Bring your whole family to the clubhouse from 6-9:00 p.m. and enjoy lots of games, Loteria, y una Tamalada! (Wednesday night that is).
Columbus Mom’s/Dad’s Meetings take place EVERY Friday at 9:15 a.m. Please come by if you can and join a great group of neighbors. Our social worker, Ms. Alycia DaLoia-Moore, works with parents and many different community partners and groups are scheduled to provide helpful information about job certifications, our schools, healthcare, technology, and more.
Next week, Wednesday, November 5th, there is no school for your kids. Elections will take place next Wednesday, and Columbus is a polling location. Make sure to vote in all our local elections.
On Thursday, October 31st, New Rochelle schools will conduct a rapid dismissal at 3:00 pm. Before the end of the school day we will practice a few safety drills. Then, kindergarten classes will leave at 2:50 pm, followed by the rest of the school at 3:00 pm.
Your children use three great computer programs at school—please make a plan for your kids to do Dreambox, Lexia Core5, and RAZkids at home each night as well!

Please continue to communicate regularly with your child’s teacher. Please email Ms. Owens or Mr. Galland as well if we can ever assist your family in our partnership to support your children. You can always email us easily at: michaelgalland@nredlearn.org and sowens@nredlearn.org. 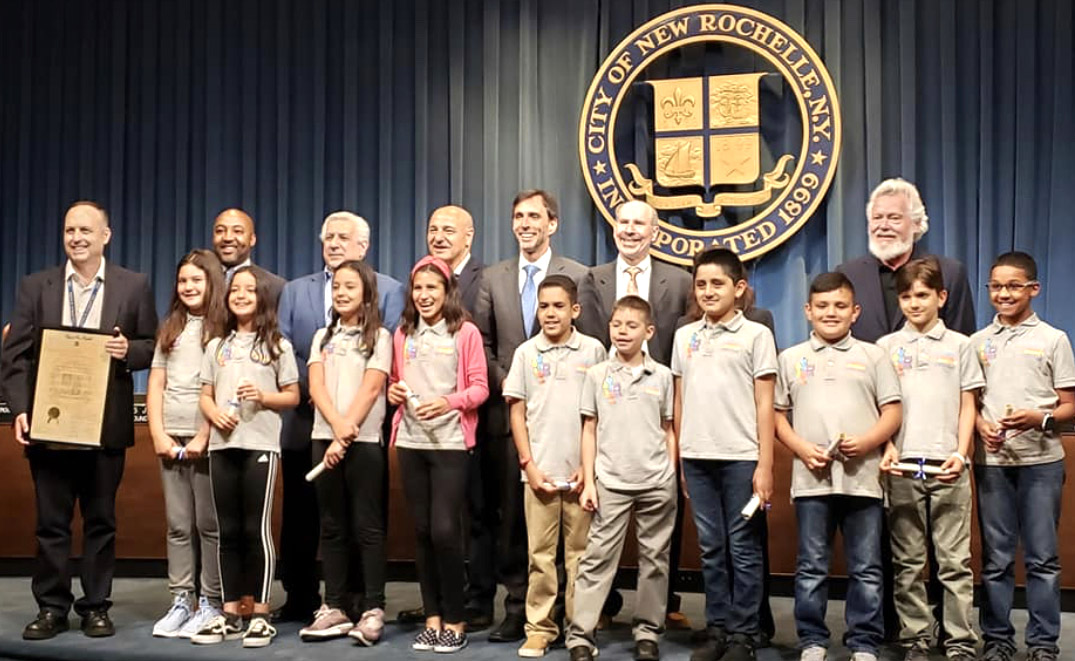 In order to preserve an orderly and safe arrival and dismissal for all students each day, please note the following:

THE MAIN ENTRANCE ON WASHINGTON AVENUE

"We promote interdisciplinary studies and encourage authentic, problem-based learning by doing.
We recognize that High Expectations result in High Achievement.
We believe that teaching and learning is fostered by creating optimum conditions to ensure success for students and their teachers.
We are committed to create a positive school climate, which respects and values diversity and nurtures everyone's self-esteem, in partnership with our parents and our community."

Link to the Form

The Columbus Chess Club sent 11 students to compete in the National Scholastic K-6 Chess Champions in Nashville, Tennessee on May 9-12, 2019.  There were 2252 chess players representing 46 states competing on 700 teams in 16 sections. The Columbus Chess Team won six National Awards.

Five students competed in the K-6U1000 section. These students are now National Champions, coming in 1st place after playing seven rounds of chess over three days.

Four students competed in the K-5U900 section. They were Naolin Concha, Joel Salick, Giovanna Murgia and Gianna Murgia. These students came in 29th place in their section.

The chess club wants to thank all of the parents, teachers, administrators, the Columbus community and the National Scholastic Chess Foundation for their essential support throughout the 2018-2019 school year.

“Never underestimate the heart of a champion.” - LeBron James

The Columbus Elementary School Chess team won first place as a team this weekend at the 2019 US National Elementary (k-6) Championship in Nashville, Tennessee.  The Columbus Chess Team are National Champions for the k-6 division for chess players rated under 1000 points.

Under the direction of their devoted coach and teacher, Mr. Mark Hegenauer, 11 Columbus students traveled with their families to Nashville to once again compete with the best elementary chess players in the country -- and this year, finally -- we WON!

So much time and patient efforts have gone into this moment.  Congratulations to ALL Columbus students who make our chess team so special.  Congratulations to Mr. Hegenauer and his partners from the National Scholastic Chess Foundation, who always find creative ways to keep Columbus involved in tournaments and lessons, no matter the cost.  And congratulations to the Columbus PTA Chess Committee and Ms. Owens for their collaborations all year -- raising money to send so many kids to the Nationals was not easy.  Together, we did it!

At this incredible juncture it is also critical that we honor and remember all the former parents of Columbus Chess Team Players from the last 20 years!  For years, caring, selfless families of the Columbus Chess community have devoted time and love to ensure that any Columbus student that had an interest in chess, had a place to play and an opportunity to learn and compete -- with ANYONE!  This moment is shared not only with our new champions, but with years and years of former Columbus students and their families.

Much gratitude and thanks to all our sponsors and supporters--thank you to all the local stores and business, and generous families and neighbors, who have donated food and money toward our team's fundraising efforts all year!

On Thursday evening, nearly one hundred 2nd grade students and parents gathered in the Columbus School cafeteria to learn about STEM and problem-solve together as a family STEM team!  Antoinette Koehler, Kelly Kalinowski, Rana Rabadi, Vanessa Guzman-Cruz, and Fran DelFico, part of the Columbus’ 2nd Grade Team, prepared an overview of STEM and three separate challenges for all to grapple with.  Ms. Koehler addressed the families and kids by reminding them that STEM investigations are at the heart of every Columbus STR2EAMing into Learning Convention (Science, Technology, Reading/Research, Engineering, Art, and Mathematics).  Ms. Koehler introduced the work this way: “STEM is hands-on problem-solving, critical thinking, creativity and innovation; this is about working collaboratively and building resilience and persistence in the face of frustration or failure.”  She added that most important, “STEM is just ton of fun!”

The teachers challenged students and their parents to build paper airplanes that were quickly submitted to grueling flight tests.  Teams were then asked to build the tallest structure possible with a limited number of index cards. Last, using marshmallows and toothpicks, parents and kids designed stable, solid structures.

Dr. Parvey and Mr. Galland were present, and Dr. Parvey rolled up her sleeves and assisted many families and kids in their constructions.  The Columbus STR2EAMing into Learning Convention will take place this year over three days and two evenings, from January 22 to 24th.  The Columbus PTA will also hold a STEM-oriented book sale throughout the convention days.